Looking for more infor on the App

Is there a video or a guide for TroopTrack Mobile? I’d like to preview it before buying it – I’ve scoured the Trooptrack website and the Internet via Google and am having trouble turning up information. Such as a feature list or screen shots. I’ve seen a few screen shots, but can’t figure out if that’s ALL of them or not. Maybe a video?

Also, has anyone considered bundling in App licenses with annual Trooptrack payment? The extra cost is… off-putting.

Finally - I’m having tough time finding review of the App. Is anyone using it? The one review in the app store has only 2 stars and suggests we just keep using the mobile version of the website.

I’d like to show some dedication to the product, but these are hurdles.

I ask ask Mark, the developer about getting some videos or if I have some more time, I can probably put some up next week (still trying to catch up. Busy season).

Considered yes, answer: no (at least not for a long while). We have a perfectly good mobile site that anyone can use for free as part of their subscription and because we went with an outside developer, the payments are going to that person.

Someone is using it. It’s bringing in a couple hundred each month. There is the one review on the app itself (like you mentioned), but that person is clearly confused and didn’t really try anything on the app. I’m not sure why there aren’t more reviews on it. Maybe the type of person who would purchase a TroopTrack app is too busy to troll the reviews? Haha.

Let me know if you have any other questions.

Thanks for the effort on videos. Even static screen-shots would be good.

I just logged into mine and took some screenshots. I hope this helps with your decision one way or another. Let me know if you want to see anything specific and I’ll see what I can do. Can’t guarantee it will be right away though (still catching up). 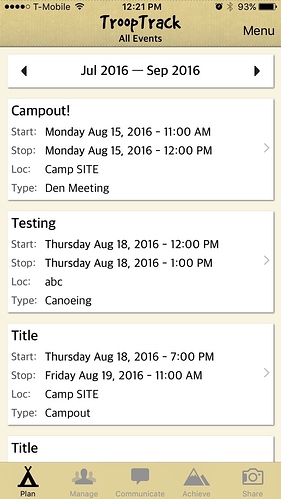 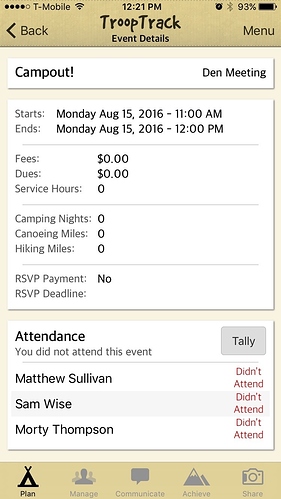 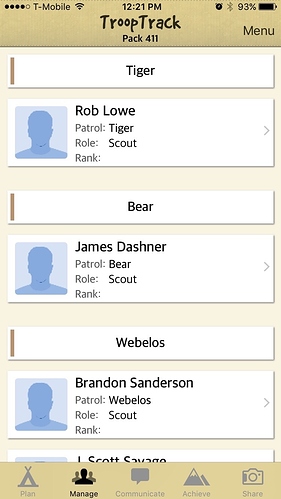 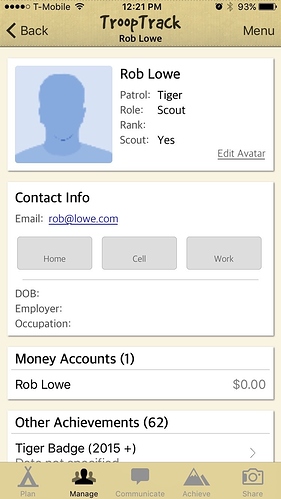 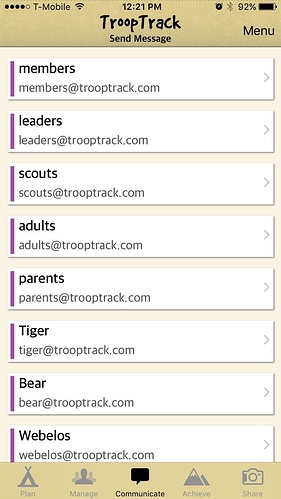 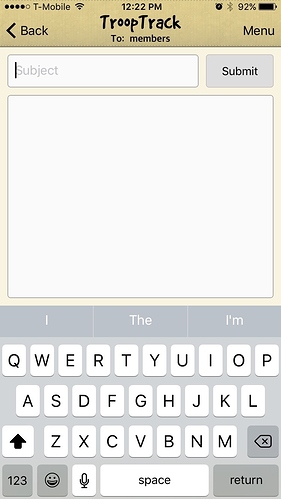 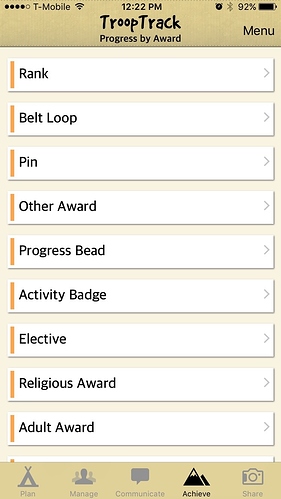 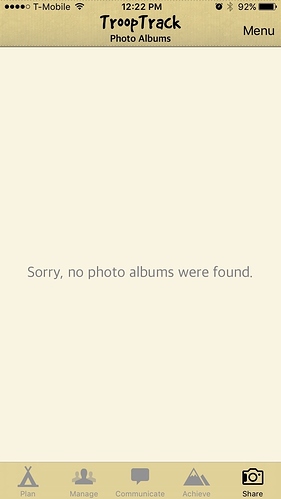 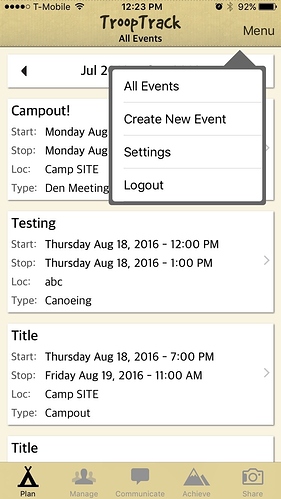 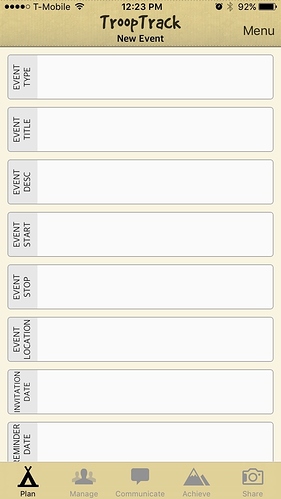 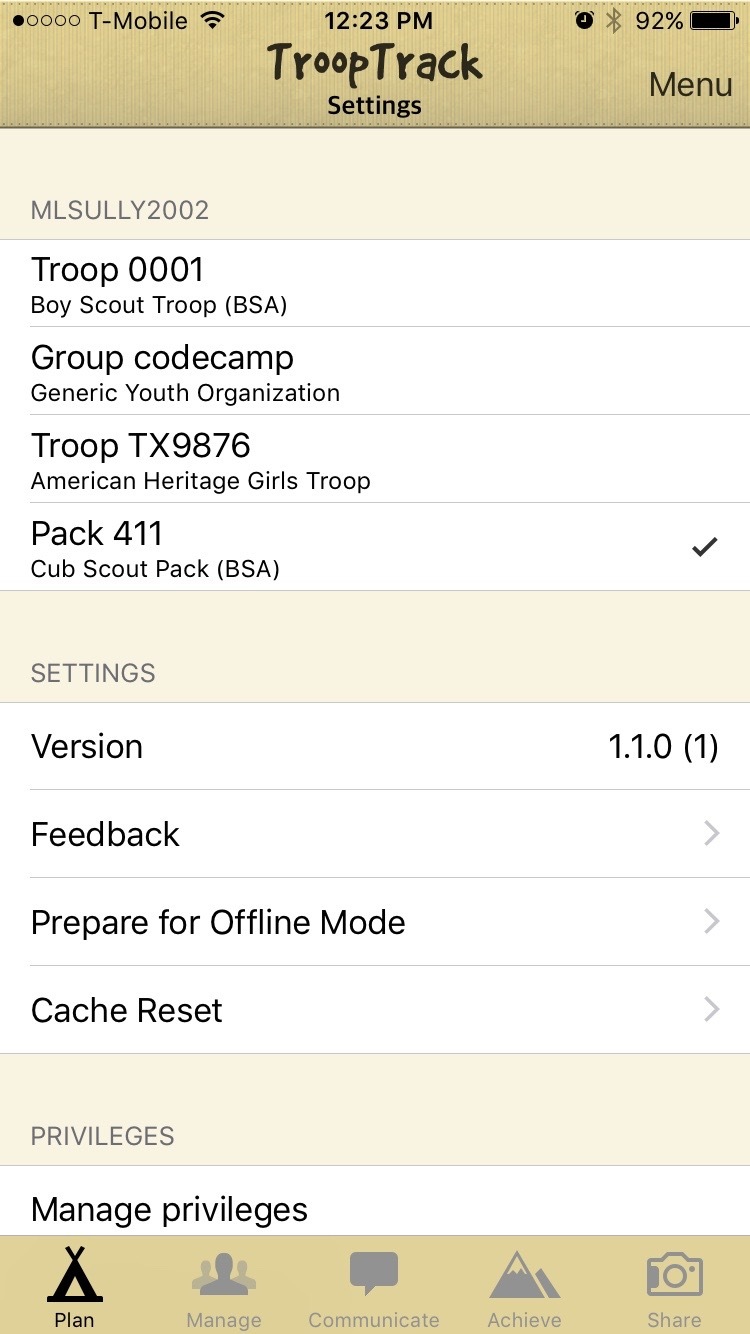 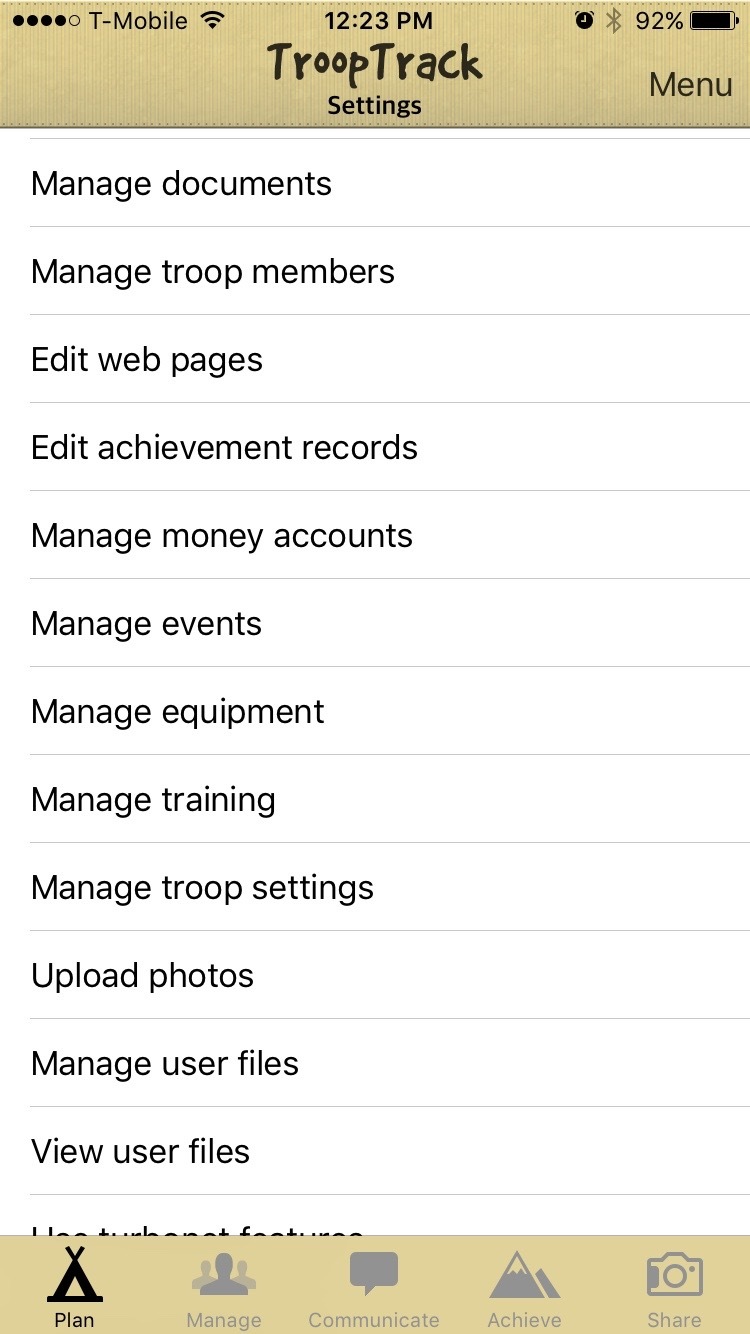 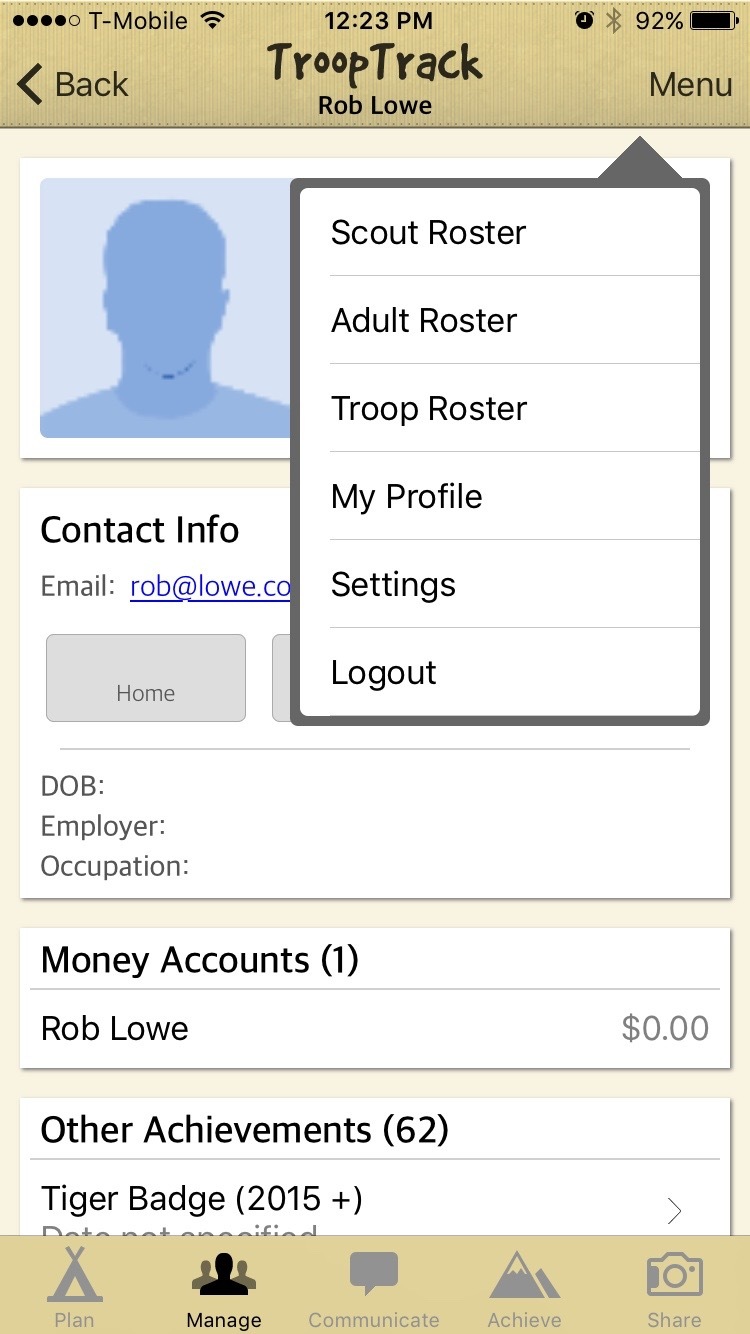 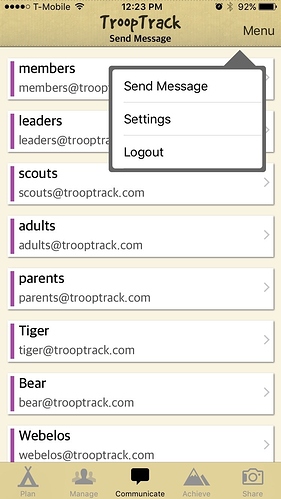 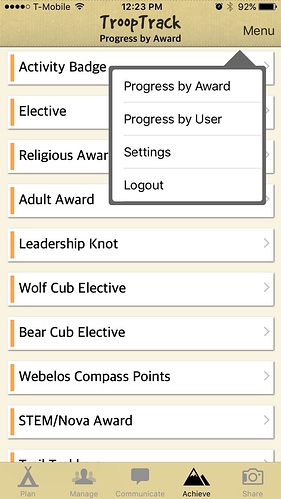 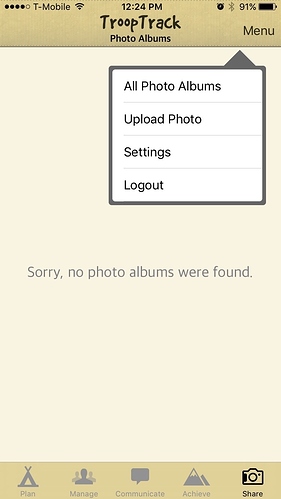 Man oh man, I would love to take attendance without having to carry around a clipboard.

Thanks for the screenshots!

I used the app as a beta tester for a while. Unless there have been some major changes, I can tell you what I didn’t like about it. Keep in mind there have been at least 2 releases since I stopped using/testing. Over all for me, it was better to use the mobile web version than to use the app.

Now having said all that, after looking at the pics @mlsully2002 posted, the app has changed quite a bit. I really wish they would offer a trial of the app for a month or so before you had to buy it. As much as I’m on TT at events taking attendance, pics, etc. it really might be handy if it works as well at the mobile site does now…

For National, we still have to keep paper signatures for signing in and out kids, but I still have to float through all that paper and enter who was there and who wasn’t on TT. I still find it easier to take that on my computer as opposed to the mobile TT site. But if the app made it easier than even the mobile site, I might consider spending the $5.

Getting your leaders on board for the TT is the hardest part. Our leaders kicked and screamed last year, but once we got them in the groove, they all saw the value of it. This year I’ve got leaders praising TT. lol

For National, we still have to keep paper signatures for signing in and out kids,

@SRUEDU, what do you mean? I’m still new to Cub Scouts and am not sure what you’re talking about here. Got a reference you can share with me?

Hey @njmike we are American Heritage Girls. We’re still required to keep paper records for attendance. Oh how I wish my leaders could sign on to TT and just input their attendance there instead of on paper…

Only one leader in my Pack has the app and he doesn’t use it much. It has a few limitations that the mobile site doesn’t have.

I think Matt meant that the mobile site works well on phones and tablets. Most of the leadership in our Pack uses it this way during meetings and such, for quick entry of attendance or signing off an achievement. We have no issues with it. Of course, for big jobs, you’ll want your laptop or desktop. However, we built a checklist from an Galaxy 5 and it worked, wasn’t easy, but it worked. So, when the Andriod app releases, I’ll probably pass, just because the mobile site works fine and it’s free.

And just from experience - when I let leaders and parents know about the mobile site, we saw a big increase in TT participation.

Mobile app is useless unless you want to just look at stuff. There are very limited features to actually insert updates and basically no admin at all. I purchased the app and regret throwing away 5$…

Yep, I paid for the App and it really isn’t useful for me.

It may be useful to my son (a scout) at times, and it nice to have the off-line roster, but don’t expect to do any Admin, and many of the functions are very limited.

I use the app quite a lot, and although it is not a full featured app (does what the web site does), it meeds my needs just fine. I use it for recording attendance on the spot…save time & paper. It is also useful to have to contact parents of scouts when needed. It is also useful to record SM conferences as complete.

I use the app quite a lot, and although it is not a full featured app (does what the web site does)

Humm… you must not use the Admin features of the website much, and I must not act like a parent much!!

…(does what the web site does)…meaning it does not do everything the web site does, but has the right set of uses for on the go access…If I need more I log onto the Mobile web page vie my phone or iPad.