I support this as well.

Not mentioned (directly that I can see) was the idea that the “Email Invitees” email should also contain a link to the calendar event. There was a post on that idea, but it was closed as a duplicate of this. Since I don’t see anyone mention it, I’m adding this post to include that idea.

Yes, do it! It’s so needed to make it TroopTrack more user friendly!

I will really love it when you get this working.

I agree. Here is a screenshot. RSVP from an email without having to log in makes my life much easier. 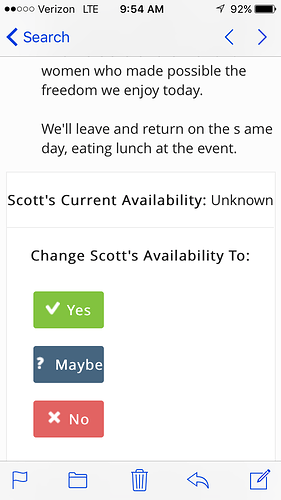 Hi Matt,
I am adding you to this so it’s on the staff radar.
Anything the TT staff can do on this would be greatly appreciated!

Ditto. I sent out my first email asking for RSVP’s and 3 families have responded (out of ~20). Maybe having a link in the email would have made a difference.

I agree that including “RSVP Request” or something similar in the subject line would be helpful for the families.

I don’t know how you would know to include the non-registered siblings in the email, since I don’t see them listed in the household information. (Maybe I missed it?)

There is another thread in which we were discussing how to capture information for the invited guests - names, ages, genders, etc. Maybe if you click the RSVP link in the emai, you could have an option to enter guests/ sibling information at that time?

Any news on this? Only one or two out of 24 RSVP via troopTrack because it’s too hard - clicking on a link in an email would be a lot more useful. We’ve given up asking for RSVP’s via TT - it is a waste of time the way it is now

I like this idea as well… However, one caveat that is not being looked at
with this suggestion is, the option we have to make when planning an event,
and that is “Payment Required to RSVP”. As a coder, that option,
unless you have money already in the Scout’s account would be rather difficult.
Mainly because you would still have more clicking to make the payment.

I’m just throwing this out there…

Agree completely with everyone that this will be a great feature. Thank you for agreeing to add this in as a feature. Love the power for Leaders, but always want it as simple as possible for Parents and Scouts.

While you are working on this, a simple related enhancement would be to put the user’s current status in the email. "Your RSVP is: Yes, No, Maybe, No Responded.

I frequently go into TT when I get email reminders, because I’ve forgotten if I responded or not.

Any news? We’re starting a new year and it would be nice to know who is coming to things.

This will come after we officially release the new subdomain emails. Still testing and working out some issues.

Any idea on how far away it is? Progress seems to have ground to a halt lately aside from some minor bugfixes.

Unfortunately, we had to put a lot of stuff on hold with the big Rails 5 upgrade. That gave us some problems, but we were able to get it up and running and now that is behind us. We are now focusing on some of those bug fixes and adding a few smaller features. The next big feature will be subdomain emails. With that will come the ability to add features such as “RSVP directly from emails”. I’m not saying that’s going to come immediately after the release of subdomain emails, but we are on the path to make it happen.

Thanks for the update Matt. Sounds like exciting things are coming!

I actually think this is a separate idea. While clicking directly in the email would be great, I like the automatic link. People can click on the email we sent and find details.

Any movement on this yet?

Yes, but nothing to release yet.