We just pushed a couple of changes to production:

1) Ryan made some cool improvements to the way we update production. It used to take about 14 - 17 minutes to update the site, but now it takes about 2 minutes. This makes it a lot easier for us to deploy even in high traffic times, something we have been forced to avoid in the past.

2) For customers trying out the subdomain email feature, we have fixed a number of places where we were displaying the email address incorrectly.

3) Previously email messages would have a status of "Scheduled" even though they had actually failed to be delivered. We have changed the process to update the status to "Failed" and to include an explanation of what causes failures.

4) There is a new setting to let you use a "slim" version of the header. This will give you more vertical real estate. You can also customize the background color and the menu color. Just go to Manage -> Settings -> Edit Troop/Pack Settings and then go to the "TroopTrack Settings" tab. Here's a screenshot. 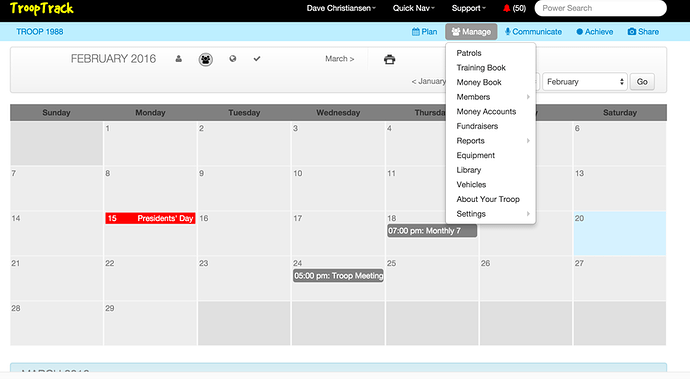 Hope you're having a great weekend!