Every year after recharter, I make efforts to update the training records for all our members. In doing so, I discovered that the current list on TroopTrack is out of date and there are courses that do not show up at all. (at least on my screen)

The most recent Training Course List from BSA National is as-of 01/05/2021, so this really was just updated recently. Training Quicklinks | Boy Scouts of America

I put together a spreadsheet that matched this most recent course list (2021) to the last update that I was aware of (2019) and then cross-referenced that list to the list on TroopTrack. I have attached that file for your reference.

When I compared the 2021 list to 2019, I found that some courses were added and others were retired. I have highlighted those course accordingly. (Matched = Yellow / New = Orange / Retired = Red)

When I cross-referenced all of that to what is on TroopTrack, I put those notes off to the right side of the course in question. You’ll see that some courses need to be added to TroopTrack (“Not On TroopTrack”) and some courses do show up on the list but have no training code associated with it (“TroopTrack Shows Course But Missing Code”) .

Would it possible to update the Course List on TroopTrack to the most recent release?

I hope this is helpful in getting the TroopTrack training list back up to date with the most recent release. If you have any questions on what I did, I would be happy to help.

I made an assumption that my previous spreadsheet might not be easy to copy and paste into your system when the course code and the course description are in separate cells. I did some legwork and created a single list of all the courses, new and old, with the code and description combined into one cell. This should make copy and paste much easier.

I noticed today that these courses have begun to show up in the list. However, these still do not have training codes associated with them. For instance, the sea scout AOWLS course shown below. The course code for this is CS98 but it does not show that. It would be nice if it showed up as “CS98 AOWLS” 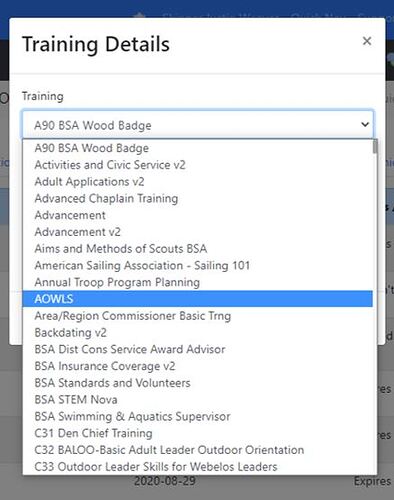 The reason this is important is courses are grouped by program and there is an order to the course code. This would organize the courses in the list correctly by code/program instead of by the first few letters of the descriptions which throws things all over the place. It also makes it harder to search for courses when the course code is not included.

I’ve been putting in these trainings and thought the course code was going along with them (there’s a box for them at least).

I’ve updated some to have the course code in front.

My concern is that a lot of the codes are S and a string of letters or numbers. I’m worried this will be hard for people to sort. Is including the training code at the beginning the best thing to do when many codes have the same letter at the beginning?

I was thinking of maybe putting them at the end so there’s the course and then the code afterwards?

Let me know what you think,

If it were me I’d put the code in the front because there is actually a method to the madness in the code naming scheme. It groups similar and concurrent courses together as well as courses done one after the other. It also helps with data entry because when I pull a members training record this is what I see. 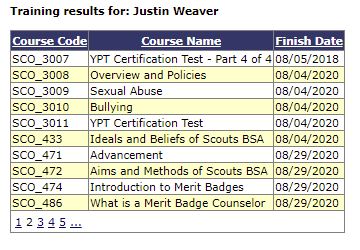 It’s much easier to search by the code than the course name. As I’m scrolling through the training list on TroopTrack I’m really just watching the course code numbers go by, which are organized alpha-numerically, and ignoring the course name completely. Once I find the code, I verify the name and then add that course to the member’s profile. Again, take for instance the SCO_601 course and the SCO_602 course shown in the screenshot below. Those are two courses that are all part of the same training module done at the same time. The course code keeps them together in the list but if the code doesn’t show up first, they are now separated in the list ; one under the “S’s” and one under the “P’s”. 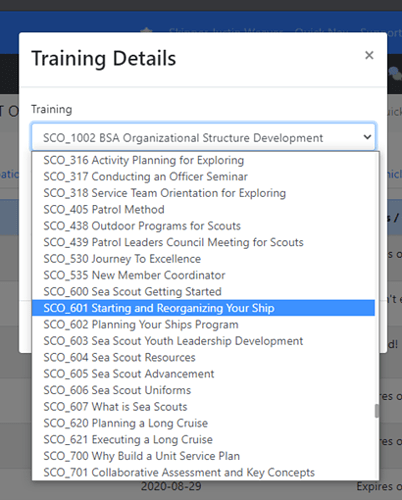 I believe I got all of those new ones in. Thanks for the lists they really helped!

Let me know if any are missing/out of place still.

I was able to get those things corrected and fixed. There were some duplicates I couldn’t find though.

Also on the file you gave me P60 says “The Strategic Training Plan”. Is there another name for this?

For P60, there are actually two courses listed under that code. I think one is a wrong. 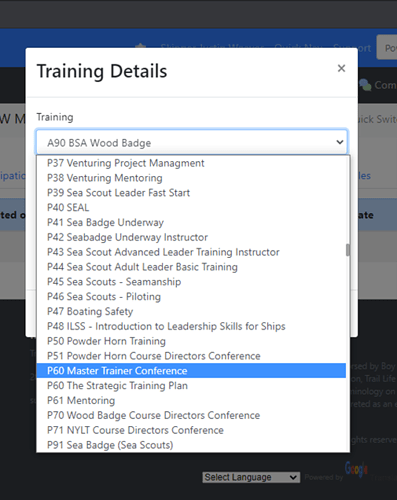 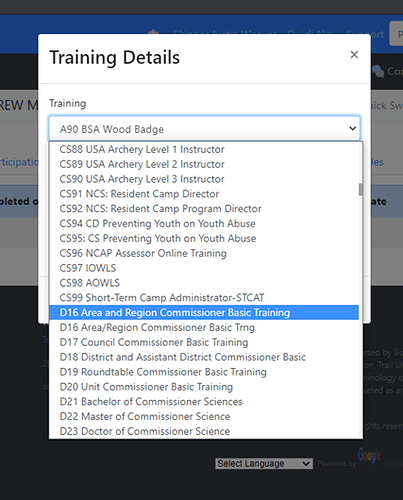 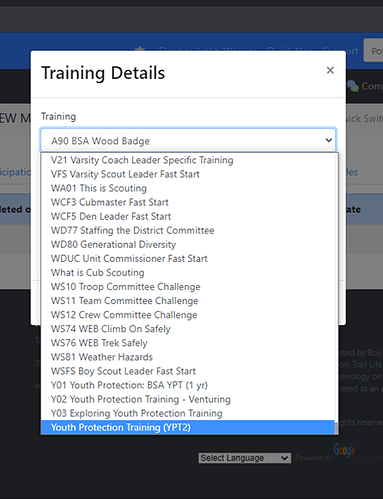 Otherwise, this is awesome!! A great sync with the National catalog. Thanks so much for doing this! I know it’s probably tedious work.

I was working on updating training records this weekend and I found a few items that are not showing up in the TroopTrack list. Also some items seem to reverted back to what was last there before we did the revision. Could these be updated/added?

Courses That Are In TroopTrack But Missing Code - Needs Updated
All of these fall under the CS19 Lineup. I think they were updated but reverted back to not showing the SCO code at some point.

I got those updated/added in. Some of them I did have added in, but they weren’t put on any units. This most likely happened as I added them before, but didn’t assign them.

You should be seeing them in now. For me I saw that the preparing families for outdoor adventures had the code already. Are you seeing one without the code?

I just want to say, I know this is tedious work and I’m probably asking a lot. Thank you for all you are doing with this!

I got those codes and that course added. I don’t know how I missed some of these in the sheet, but thanks for your patience and helping me get this updated!