FIXED: The update broke the achievement view on a scout

It only generates blank pages/errors

EDIT 1: This seems to be fixed now. The achievement view for a scout is working.

BUT - the edit functionality has the “notes” section ridiculously small. Like 2 letters per line.

We are having similar problems. We are also having trouble with “Record Attendance” doing the same thing. Just a blank page.

There is a problem with the entire system

I wasn’t sure. I hadn’t logged in in a couple of days and suddenly today it looked very different and a lot of page weren’t working. I thought maybe it was browser, so I restarted it with no success.

@dave - Just curious if this update is still in progress? Or these are just glitches to still be worked out. Thanks!!

For American Heritage Girls, when I go to look at an achievement record, it’s a popup that’s translucent on top of the page, so I can see two sets of text in the same spot at once. Pretty unusable 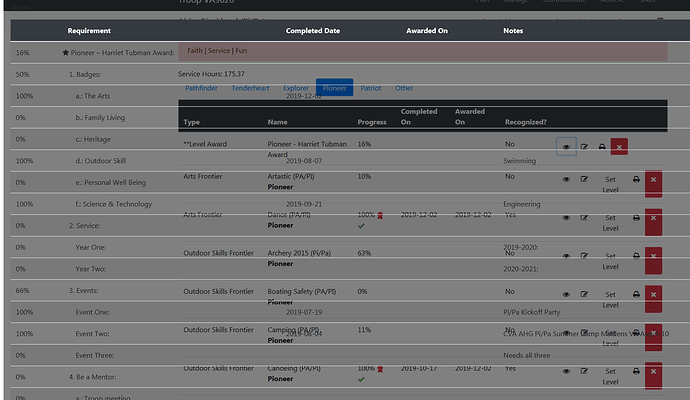 This is really bad since we have an awards ceremony on Monday. My plan was to complete the awards cards this weekend. Thankfully, I have a printout of the the awards by trailman in PDF format (before the system went haywire).

Took me a minute to find the achievements. But I can’t edit any of mine. Nothing comes up. My parents are gonna have some serious trouble with this update. Most of them are not TT savvy. The ones who are are going to struggle with this.

Hopefully there will be some cool new features that roll out with it.

It appears the software has regressed. They should take the site down and fix it before rolling it out. Hopefully there was system and user testing first.

I wouldn’t stress about it just yet. It could just be being done in stages. When my husband does releases/updates, they often go in stages. Hopefully by tomorrow everything will be rocking and rolling.

I hope so, but weekends are the time I have to do this stuff. I have to print and bag all the awards, so it isn’t a 5 minute job.

The update was today, and I am not able to mark awards as “recognized.”

I am in Achieve > Present Awards. I have checked the Recognized checkbox, and hitting Save, but it doesn’t seem to be saving. When I select Present Awards again, the awards that I marked as Recognized are still showing up, without the checkmark.

Also, there is no link to this support forum from within TroopTrack.com now. Is that intentional? I had to google to get here.

I think there are major problems throughout the sytem

The Share --> Photo Album functionality is broken as well. I am not able to upload new pictures (but I can see the pictures that were previously uploaded).

EDIT 1: It seems that this is fixed! Thanks @dave

Hi Everyone,
We’re working like crazy on all the errors. Saturday is usually a slow day for TroopTrack traffic, and December is in general, so we planned on rolling out the update this weekend for a while. We should have done a better job of announcing it so you would all have been notified in advance. If we can’t get it reasonably stable by 4:30 pm MST today we will roll it back.

Thank you for your patience.

Thanks Dave. Let us know if you need help testing in the future because it looks like we have lots of user testing going on.

Thanks Chuck. We really appreciate your help.

Recording attendance for AHG troops should be fixed now.

Everything associated with awards / reports being generated into a PDF is not working. Also, I can’t see an individuals badge record.

I know it can be frustrating, but they are usually really great about getting things up and rolling pretty quickly.