We are releasing a major new feature and several bug fixes this morning:

1) We were previously showing the BSA Permission Slip feature to Scouts Australia groups and some other non-BSA groups. This wasn't helpful and we've disabled it until we can get our hands on official permission slips for these groups.

2) Spencer has added a new privilege that allows you to separate the ability to purchase awards from the ability to record progress on achievements. This new privilege is now needed to mark awards purchased, presented, etc. and to purchase awards through TroopTrack if that feature is supported for your group. This privilege was automatically added to anyone in your group who currently holds the update achievements privilege, so if you don't want to restrict anyone you don't need to do anything.

3) We rolled out a new "Meeting Schedules" feature. This is a new tool for planning recurring meetings like troop meetings, committee meetings, etc. You can try it out by going to Plan -> Meeting Schedules. It is available to anyone with the Manage Events privilege.

Have a great day!

We are just starting out with using your software - works well thus far. I am having a problem with setting up meeting schedules in that they do not show up. Is there a limit to how many schedules you can run? And yes I have gone through and reviewed the items and saved them, but they show up as 0 in the list. See screenshot. 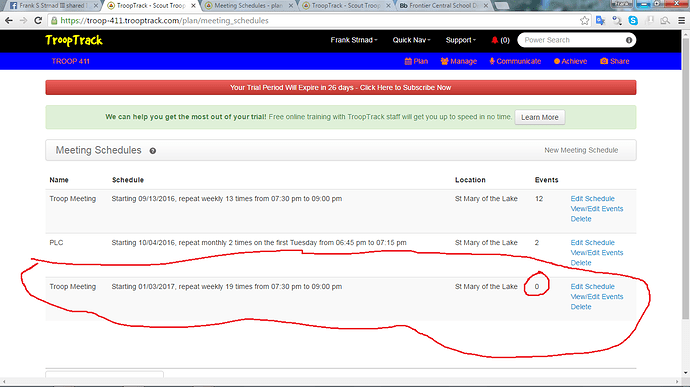 OK, so if I don’t try planning a meeting schedule, but go and use the event scheduler and plan an event and edit the event to repeat, the scheduling works for what I need it to? Weird that this works and the scheduler does not fro some reason for me?

I am having the same problem! My first few recurring meetings scheduled perfectly, but now it is not working. I am also being kicked from the meeting scheduler page to the “manage dens” page, where it is telling that I need to be logged out to access the information. But logging out and re-logging in does not seem to be helping.

@bubbahoch I just got it to work - I think the trick is to make sure that you have one “invitee” on the meeting. I’m entering all of our open meeting dates on the calendar, and then our den leaders go back in and edit once their schedules are set. Since i don’t know who will be using which specific meeting spot, I am just inviting myself to all of the meetings to have them schedule correctly. I’ll go back and take myslef out once they are in use by various dens. Hope this helps!

Hmm. I’m not sure I like the need to work around this by adding invitees to normal troop meetings. I do not invite “Everyone” to troop meetings because that include alumni and friends who are not currently scouts, parents, or leaders. So I invite by patrol. But what happens if my patrols change before the meeting date? Does the list automatically update before sending out the meeting reminders? I’d rather tell people to look at the calendar than have them think they get reminders and then not, so I really want to understand how this works.

Oh. And while we have a regular meeting schedule, I do change the invitees to some meetings. E.g., doing an explicit invite to parents for our parent’s night. I guess I can cancel that one meeting and redo it in the schedule as a regular event.

The schedule requires me to put a location in, but then when it created all the individual events, none of them had locations.