We've been quiet lately, but that doesn't mean we haven't been busy!

Well, for the first time in a really long time we’ve gone 30 days without posting a product update. Please don’t think that means we haven’t been hard at work - we have in fact been very busy. Unfortunately, most of the changes we’ve been making have been things that aren’t easy to see. I’m going to take a minute to explain, and then I’ll list the changes we’ve made that you can see.

TroopTrack is based on a web application framework called Ruby on Rails (Rails, for short). This framework provides a lot of awesome features from security to database integration and more. Every now and then a new version of this framework is released and that usually means we have to make some changes on our end to be compatible with the new version. We work really hard to make sure that we never fall behind so that you always have the latest, most secure version of Rails.

Rails 5 was released last week. We knew this was coming and we are extremely excited about it. It has several new features, such as built-in web sockets, that we will be able to use on our never-ending quest to be the best scouting software on the planet.

One of the changes in Rails 5 is related to form security - this is a feature that prevents users from manually adding data to forms and then tricking our servers into saving changes they aren’t allowed to make. Rails has made an important change to this to make it easier to use. This change, while extremely valuable, also means we need to make a pretty big number of changes on our end.

And that’s what we’ve been working on. Spencer and Ryan have been leading the charge on this and so far they have submitted more than 50 “pull requests” (a pull request is a set of code changes that accomplish a single thing). I’ve been working on other smaller changes related to the Rails upgrade. In other words, we’ve been doing a lot. Unfortunately these changes aren’t visible to users, kind of like replacing the pipes in a house. As long as we don’t break anything, you aren’t likely to notice.

During this time, we’ve also fixed a couple things you can see. Here’s the list:

I’ve made a custom service hour report that just has the name + the service hours and that is definitely fixed. But when we print out Board of Review Worksheets, they show up with bunch of extra decimal places like this: 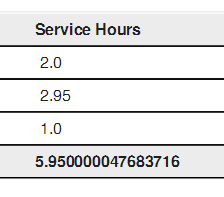 I notice you said “some cases”. So, is this still one of those cases that are still being fixed?

Thanks for all the great updates!
Steve

@Spencer, can you try to reproduce and fix this one?