We also are going to have that issue. We will have 4 coaches over our Pi/Pa group.

I also need to know the answer to the question. I have selected that the units are combined but my leaders can only update the records of the unit they are placed in.

Did anyone get an answer to this?

For the Pi/Pa group, you can press edit and indicate that it is a combined group. Right now we don’t offer the ability to have a leader in two places at once. Your best bet would be to combine the units rather than try to split the leader.

Do we now have the ability to have a leader in two units at once? I also marked both units as being combined under the edit button, but our unit leader is unable to make changes to the other unit.

Please, after you’ve marked a unit as combined, put all the girls from both PI/PA units into that one and you should be all set.

Also, when viewing their profile account/achievements, the patriot is first sent to the pioneer tab instead of the patriot tab. When I combined the units in the edit feature of the manage/unit page, it asks for a name (Pioneer/Patriot) and then asks for the level. I can only choose Pioneer or Patriot even though they are combined.

I’d like our members to have the easiest viewing experience to help cut down on confusion. Is there a way around these? Thanks for your prompt response!

I’m not sure why you would record the same badge twice. The PA/PI awards are all combined. 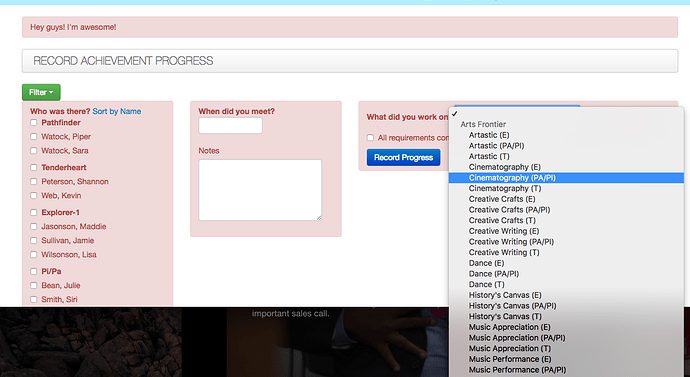 Under Registration Info in a user’s profile, you can decide what level they are. Just because they are in the same unit, doesn’t mean they’re the same level. This mostly just decides which level to default to for awards and service hours.

Once you’ve awarded something, you may also set the level to either PI or PA.

There shouldn’t be any double entry involved. If other users would like to chip in, please do.

Our Pi/Pa’s are combined into one group this year for the first time also. We just named our Squad on TT, “Pioneer/Patriot Squad” and then marked it as a combined unit. We left the level box blank as it has both girl levels in it. When we integrate with Connect, it automatically lists our girls’ levels for us in their profile. There have been a couple of girls we have had to go in and edit, but as a general rule, they are all correct. When you look at their individual Achievements, it will list them as Pioneers or Patriots. Sometimes a badge will be entered for a Patriot and listed as done as a Pioneer. We go in and change the Set Level button, but that also is rare and once we fix their level after we integrate, it’s usually no longer an issue either.

I personally have 5 girls in the program, two are in the Pi/Pa squad. It doesn’t cause any trouble for their profiles or me to record badges. One is a Pioneer and the other a Patriot. Even when entering badges for the Teams (which is how we break down the groups our girls work together in), where we have Pioneers and Patriots on, TT adds the badge under the correct profile for each girl. We’ve not had duplicate entries if a girl is on a Team that works on a badge that she already has. If the information is entered bulk, the dates of her accomplishments may change, but she still will show up as having received the badge and it doesn’t show up on my shopping list. Does that make sense? Or did I just confuse you?

By combining the units into one giant group, I was able to add all 4 of our coaches to the Pi/Pa squad and they can all make changes to any of the girls in their squad. Next year, we will have 30 girls in that squad and 5 coaches and one coordinator over all the girls, essentially giving me 6 leaders in there. We will add them all to that group. We no longer list them out as a Pioneer group and a Patriot group, just one big group of 21 girls (this year).

Thanks for the replies!

Here is what I’ve done: I made a combined unit under one name for all the pioneers and patriots together, marked it as a combined unit and no level under the edit button, and set the appropriate girls’ levels in the profile account/member details/registration info. This fixed the viewing of the profile account/achievement tab for the girls/parents.

When I test a bulk badge progress entry (starting a new badge) for that group, the badge is put in the appropriate unit level within the profile account/achievement tab. However, for the patriots, it not only lists it under the patriot unit level, but it also lists it under the pioneer level but set as a patriot. (double entry) I don’t make the double entry;it adds it automatically to both levels with the profile account/achievement tab. What am I missing? Is there something else I should be doing so it doesn’t show in the pioneer achievement tab for the patriots?

Any direction is greatly appreciated!

I’m just jumping in because I didn’t know you could combine the units this way. We’ve never done it on TT, though we do in practice. We’ve simply created a custom email address that includes everyone for communication purposes.

I’m jumping back in because we have a new Advancements coordinator and she has brought up a few issues.

We have some “double entries” like GermaineBurgwald described where a badge shows up under the Patriot and Pioneer tabs.We’re not sure how or why this occurs.

Also, if a badge shows up under Pioneer, but it was completed as a Patriot and we set the level at Patriot, why doesn’t it move to that tab? It would be helpful for that to happen since people often forget to look both places for an applicable badge for the Level Award, say.