TroopTrack moving members into other patrols

I have noticed members in my unit moving from one patrol to another or moved to the unassigned patrol. This is impacting our signups and innovations. Not sure why this is happening.

I would not think this is happening randomly on its own. Have you double checked with everyone else in the group that has full admin rights to make sure no one is doing it for some reason or even accidentally doing it? If it really does seem to be the system then you would need to send an email to support@trooptrack.com so they can take a look. They are short staffed and this is their busiest time of year so they are not in the community as much as they were previously.

I just wonder if this might be unexpected fall out of the new feature where an individual could be in multiple dens/patrols/units and perhaps they are accidentally removing, or changing their own assignment.
I was not able to change my Den/Patrol/Unit with my test account unless I had the Manage Troop Members Privilege. Does anyone who has changed have that privilege assigned to their account?

I am the only one with that privilege enabled and I did not make the change.

I have seen this with both of our units too. I dont think this is something we are doing. Only 2 people in our units have these privileges. We have both seen this happen with no explanation

I also had this occur.

I just noticed this happening again. This Scout has been with the unit for over 4 years and in the same patrol the whole time. Suddenly he is unassigned. What is strange is he is not in the same UNASSIGNED as the other Scouts that are in UNASSIGNED on purpose. I checked is profile and the Patrol is blank. See attached 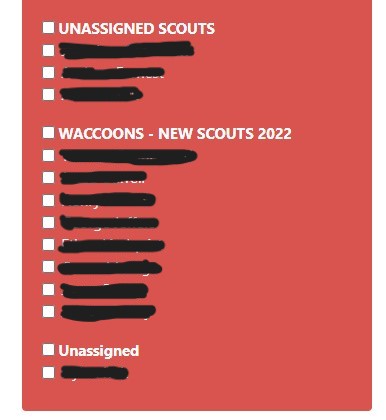 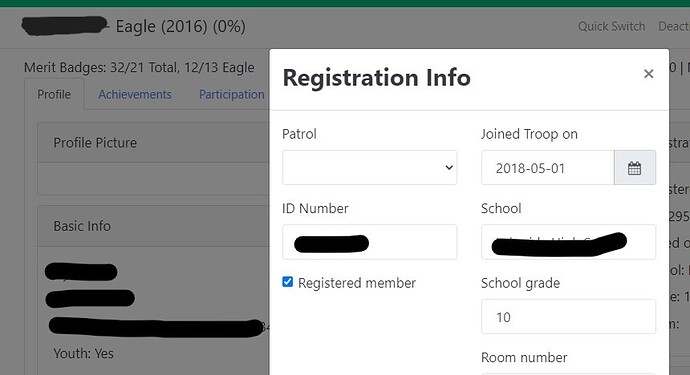 I would suggest sending an e-mail to support@trooptrack.com as this is not something that Community members can help with. TT is busy and understaffed so it will be quite some time before they get back to you. While there have been a few reports from others of this happening it does not appear to be a system wide issue so perhaps there is something specific to particular units that might cause this but again that will be something the TT support staff would need to dig into.

Specific to the UNASSIGNED SCOUTS vs Unassigned patrols, it looks like your Unit created UNASSIGNED SCOUTS as a custom Patrol. Unassigned is a system generated Patrol which is used automatically for any members that have no patrol assigned either at time of registration or if the Patrol is removed from a members profile.