What a mess!! We have Dens entering both requirements for 2016 and 2015. Whats worse id the 2016 requirements dont show anything toward eaning the rank. I dont see anywhere in achievements, that show progress toward the 2016 rank requirments other than the individual adventures themselves. This is going to be a nightmare to untangle now. Where can we see the 2016 progress towards rank and why does it not update the percentage toward earning the Rank? You only show the 2015 rank progress,

Here’s my response to your other post about this:

Right now the adventures do not automatically apply to the 2016 ranks. For now, you just need to edit the 2016 rank, mark the adventure complete, and you’re done. We thought it would be better to make the 2016 requirements available in this form rather than making everyone wait for us to add the auto populate for the ranks.

Thank you for your patience while we work on this.

I agree. This is a complete mess. I’m attempting to enter bulk achievements for Webelos Electives and only the 2016 electives show up now. When I add a 2016 elective it will not update the Webelos progress bar for either the 2015 or the 2016 rank. Believe me. I’ve tried both. So right now I’m having to spend hours entering advancement 1 scout at a time for my 13 Webelos just to be able to use the 2015 Electives which seem to work properly.

I have wasted so much time attempting to get our scouts’ records straight. I think it would have been better to deploy a solution that worked correctly.

Where are the 2015 electives in Bulk Advancment? 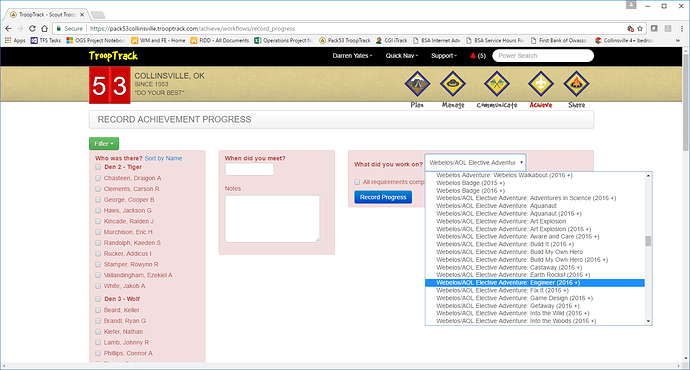 The 2015 electives are right next to the 2016 ones. They simply don’t have a date. Are you looking for one in particular, because I see them just fine in your image.

The current process is pretty simple.

I know a certain adventure is a requirement or an elective because it has it in the name. When I complete a requirement, I open the corresponding badge and mark it as complete. Done. Can be done in bulk, too.

We have a scout named Kenny Pink:

He completed the Bear Claws 2016 requirement:

We mark it as complete:

We see the progress: 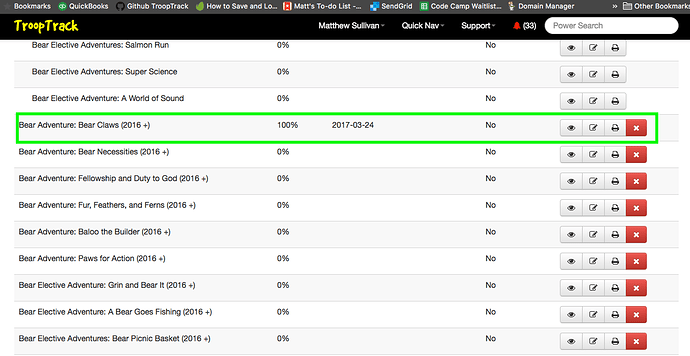 We go to the badge: 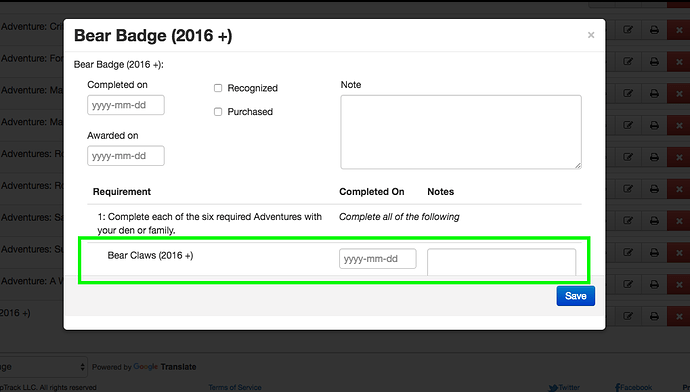 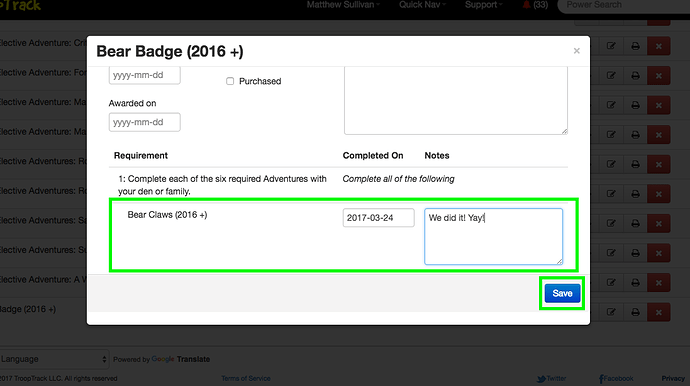 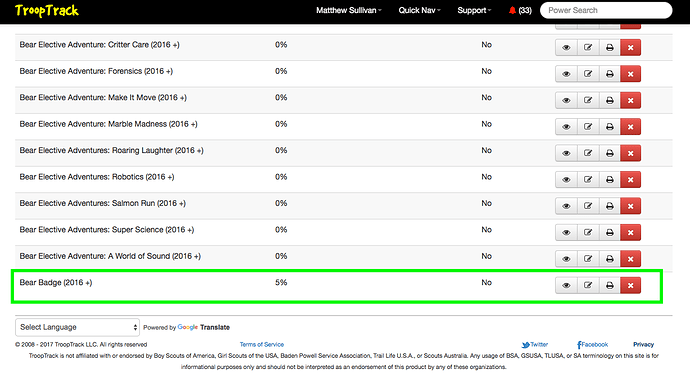 You can also do this in bulk. For the 2015 stuff that was already completed, it’s just a matter of filling it in and you can pull up the badge book on one tab and the ranks in the bulk achieve feature in the other to catch that one up.

When we finish working on it, it will be like the 2015 ones where it autofills the 2016 requirements, but you may still have to fill in the 2015 ones because of the way it’s structured. Speaking to several users when the new stuff was released, we agreed that this small, temporary price to pay is worth it to be able to use the updated requirements.

I’m sorry it has been hard for you, but if it is as difficult for your pack as you suggest, please just go to Manage > Settings > Manage Active Achievements and turn off either the new ones or the old ones.

eased, we agreed that this small, temporary price to pay is worth it to be able to use the updated requirements.

From bulk advancement, the 2015 (non 2016) Webelos Electives are not there. Please show where were in the dropdown the non-2016 Castaway Elective is? Same for Earth Rocks, etc. I see them all in the other tabs, but with 13 scouts for 1 den, I need to be able to use Bulk Advancement entry.

Both of those 2015 adventures have been deactivated by someone in your Pack. You can reactivate them by going to Manage > Settings > Manage Active Achievements, checking them, and then saving.

That explains a lot. Thanks for your help.

Yea but what about the Dens who started on 2015, then when the requirements
changed in 2016 started entering under those requirements? As far as I
can tell one doesn’t update the other and it could cost the Pack money in
buying duplicate belt loops. You need to have one Rank… ie… Tiger and
have both 2015 and 2016 adventures update to that one rank. I realize
National BSA has put this burden on us all but it truly is a mess in our
Pack and trying to go back and reconcile between the 2 sets of
requirements for the dame badge… Its tedious and very time consuming.

You shouldn’t be using both 2015 and 2016. If you started a 2015 requirement, finish it and mark it in the 2016 rank. There should be no other updating of requirements than that.

If I’m halfway through a 2015 required adventure, I finish that, mark it as complete in the 2016 rank, and move forward with the 2016 requirements. I should not continue using the 2015 ones unless that is a personal preference (until the 2016 ones become mandatory at the end of this year). I should just be using 2016 requirements and adventures so there are no duplicate orders or anything.