When we set up an event and then go back later and add service hours to the event, they don’t populate on the girls who attended the event. For example, we have a Scout Sunday event, we went in and set the service time to 1.5 hours. The girls who were marked as attended, do not have any service recorded for the that day. But if I go into Attendance → Record Attendance → and manually add the hours on each girl it will add it to her record, even if it shows that there is 1.5 hours in the top box.

It’s not quite like what is described here, as we get the boxes, but it still doesn’t show up. Do we need to go into the Attendance add the hours for each individual girl even if we have set the default as 1.5?

When I updated an event (adding service hours) those hours don’t appear on the service/participation tab for users who attended the event. I can live with that as the event was last week but now I wou…

There used to be a fill down option on the Record Attendance Screen whoever was selected got the fill for each of the columns, Service Hours, Hiking, Nights whatever you were adding. Now there is no fill down, should it automatically apply that default amount to whoever is selected as Attended?

That’s what I thought. But it’s not working on ours for some reason. The hours never get added to the girl’s record. It will show she attended but not add the hours that we put in on the calendar event.

Hmm. I’m not really following. Could you record a video or some screenshots by any chance?

When on the Record Attendance/RSVP page for an event if that event has 1 hour of service added to it in the event details then it shows at the top in the Hours Column: 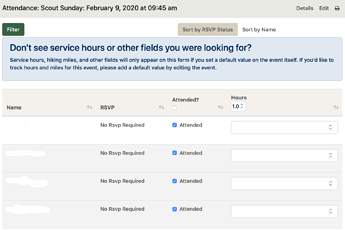 Screen Shot 2020-02-26 at 5.24.19 PM1886×1258 151 KB
If you select several participants and check the Attended box with the 1.0 Hours in the top you would think that would fill into the individual participants below however it does not.
I did find if you use the Up Down arrows next to 1.0 it adjusts to 2 and fills down the page in the Hours column, of everyone, change it back to 1 and everyone adjusts to 1. Then save and everyone who is marked as Attended gets the proper Hours added to their record.
If you want to look at an event:
https://troop-441.trooptrack.com/plan/attendance_records/1152234
Feel free to adjust it, I was just using it as an example, the attendees don’t really matter and they aren’t actually getting any service hours assigned so I can take it out later, not a big deal. If you need more let me know.
SRUEDU February 27, 2020, 3:01am #6

@dave What Aaron showed you is what we see. But unless I go in and manually enter the hours on the kids who attended, even with that 1.0 hour at top, it doesn’t give them that service hour. It doesn’t show up on their record. Below, we checked attended. The girl that has the 1.5 on her hours in her profile, we went in and manually added those. They show up on her record. 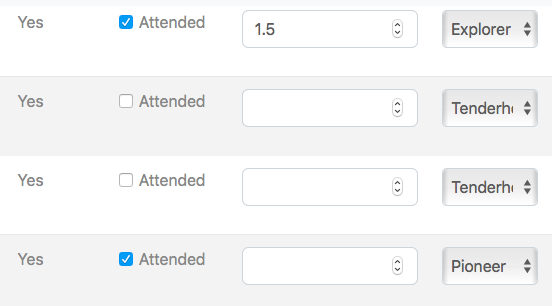 But this particular girl, when we went through the calendar event, and just used the hours at the top of the event, it doesn’t show up on her Participation for service. It’s the Scout Sunday event.

@SRUEDU If you see the Hours in the Table Header and the up down arrows next to them use the Up Down Arrows it should fill down the list.

Yup! Tried that too. Didn’t add it to the profile. Put the number in the box, but it didn’t actually add it to the girl’s hours. It is so weird. It only added it if we actually typed in the box. We’re special, we get the weird glitches.