Right now we have three different types of email groups:

If you had to read that twice, you’re not alone. These different lists are confusing - we get questions about them all the time.

Quite a while ago we made a change to TT that has simplified a lot of things - we forced all of you to use a subdomain for your TroopTrack site. When you use TT, you go to troopX.trooptrack.com, or some other url like that. We also introduced the ability to use your subdomain in your mailing lists, so instead of having something like members-troopx@trooptrack.com, you can use members@troopx.trooptrack.email instead (this is a beta feature - if you want to try it out send an email to support@trooptrack.com).

So, here’s one thing you should know: subdomain emails are the future. If you haven’t made the switch yet, please consider doing it. We will be phasing out the old email lists over the next few months.

A few weeks ago I realized that the differences between custom mailing lists, magic mailing lists, and mailboxes were ridiculous. We don’t need three separate things if we just give you the ability to define mailboxes more flexibly.

So… coming soon… custom mailing lists and magic mailing lists will die. There will only be mailboxes and you’ll be able to define them much more flexibly. Check out this screenshot: 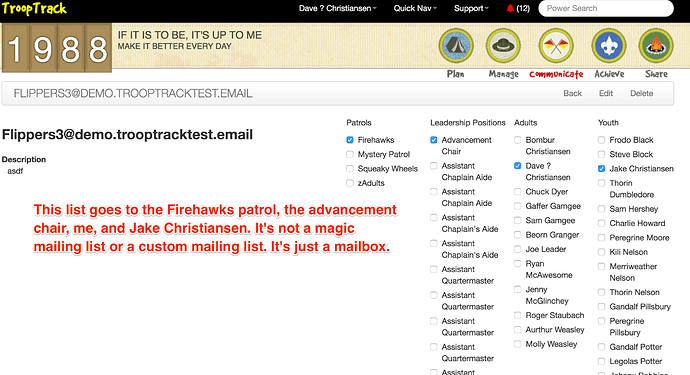 The design isn’t particularly good yet, but hopefully you can see the potential - it has all the capabilities of custom lists, magic lists, and mailboxes all in one.

On top of that, I am redesigning how you view messages. Recent Messages will be replaced by a new menu option called Inbox. It may look something like this: 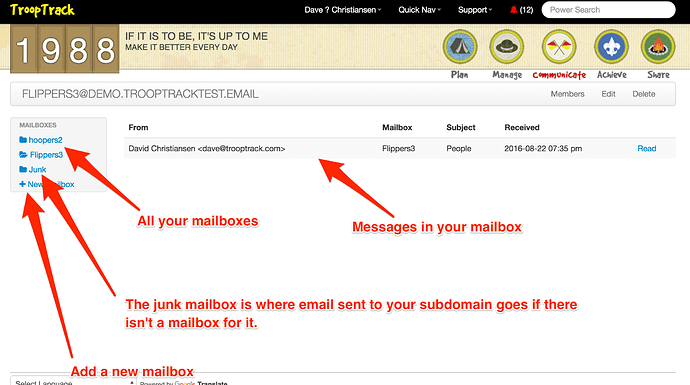 By default, anyone will be able to send messages to any of your lists.

This is going to pave the way for a lot of possibilities with email, including:

This approach to email also introduces a thing we have needed for a really long time I am calling a “membership resolver.” This is a coding concept that creates one single way for dynamically assigning members of a troop to a thing. Initially it will only be used for mailboxes, but once all the kinks are worked out it will be used for inviting people to events, assigning people to checklists and sign up sheets, and more.

It will also help us fix the problem with events where new members and other changes don’t get picked up by events. For example, if you create an event today that is for Patrol X, and you add Jack to Patrol X a week later, Jack won’t get an invitation to the event you created. This makes Jack sad. And it stinks.

Want to be an early adopter of this feature and help us shake out the bugs? Follow this thread, and when we are ready for victims, I mean volunteers, we will post here.

I like this in conjunction w/ the Membership Resolver. Without that, I’d prefer to keep the magic mailing lists around just for the ease of e-mailing an entire unit without worrying about who’s in the unit. The moderation feature could be quite helpful as well, especially if we can allow others to use the list, but keep an eye on what’s about to be sent before allowing it. That should cut down on the “FW: FW: FW: FW: FW: FW:” type emails that some are so prone to send without much thought.

David, have you considered allowing members to submit a unique domain name to you and then you allow TT to resolve that domain for that unit? I’ve been a member of several membership sites that has allowed this and I’ve run a multi-user wordpress site and allowed my clients to use their own domain name for their sub-sites. For example, my troop’s domain name is bsatroop5.com and currently we just forward it bsatroop5.trooptrack.com. But I’d prefer to configure my troop’s domain to use your name servers and have TT resolve it so that when my unit’s members use TT all they see is bsatroop5.com in the URL instead of bsatroop5.trooptrack.com. This would extend to emails as well, so I would prefer to use members@bsatroop5.com instead of members@bsatroop5.trooptrack.email if you can get TT to resolve unique member domains.

Also, I kinda think the .email extension is a little foreign (as opposed to .com or .net) and might confuse some of my non-tech parents. It might take a lot to get used to IMHO.

Hi John,
I haven’t mentioned custom domains in the labs category yet, but I’ve been working on it. We would start with support for just the web traffic. Email is more complicated and will come later.

There will probably be a one-time $20 set up fee since we will have to acquire a certificate for your domain name when we do it.

Just curious - what is the status on the suggested feature to allow non-members (general public) the ability to email a troop mailbox?

It will be available once we roll out the features described here. We are very close to opening it up for beta testing.

Please add my Troop 150 site to the beta test when it’s available!

Will this resolve the issue where if you have parents with scouts in multiple dens, you can only add the parent to one den, so they only get emails from one of the den magic mailing lists? You cannot add them to the other den “magic” list, and are forced to create custom mailing lists for dens now because of it. We have several parents in our pack that fit this mold, me included. Once I associate scouts to the family units, the members of the family unit should receive all emails for all dens their scouts are in… Frustrating!

We might be interested in being part of the Beta test on this feature if it can solve that problem.

Hi @cubmaster165 ,
There is no need to put parents in dens. Just put scouts and leaders there. If you have set up the households properly and you turn on the “Copy parent’s on all emails” setting the parents will get all emails sent to their sons.

Never knew that setting existed! Thank you! This works if the scout does not have an email address of his own, correct? Parents will still get the email?

This works if the scout does not have an email address of his own, correct? Parents will still get the email?

Sorry, one last follow up question - what is the recommendation for parents, leave them in the “Unassigned” group?

That’s what I do @cubmaster165. Some people create a den for parents, but I think that’s confusing since many leaders are also parents

So… coming soon… custom mailing lists and magic mailing lists will die. There will only be mailboxes and you’ll be able to define them much more flexibly. Check out this screenshot:

Will the reply-address domains be rewritten, by chance? So emails received at “…trooptrack.email” will have the proper address at our domain on them? I think then that this isn’t a mailman feature, but in fact is an “alias” feature in sendmail or whatever it is you are using for mail processing.

I’m happy to help test your new email features if that is helpful to you – I’ll send the email to support@trooptrack.com as you suggested above.

Thanks for the hard work!!

Can you please provide clarity on any differences between a Custom Group with the setting of “Any member is allowed to send emails to this list” and a Mailbox?

The one difference I thought of is Mailboxes would not appear in list labeled “Please choose some mailing lists” when sending emails via TroopTrack; however, I see that Mailboxes are slipped right into that list also.

So is there a difference? Can outsiders (not in TT) send to both, either?
I was hoping mailbox send emails would also be visible within TT for review purposes by the Mailbox recipients as well as some admin priv levels. But I do not see that as a feature. So is Mailbox just a rebranded Custom Mailing List? If so, why have 2 ways to get same functionality?

Thanks for the clarity.

Please switch to only mailboxes, please allow for subdomain usage, and please add us to the list/follow up post for beta testing! This is an awesome feature I’ve been hoping for. Our Troop will gladly be a victim! You rock!

Am I understanding this correctly? Will emails go to an online mailbox and not to the email on the scout / parent? I fear a closed email system will be a deal breaker for us. Our parents want the communications to go directly to their existing email and not have to access them within a system.

If that is incorrect understand please let me know.

Hi Harlan,
You are reading this incorrectly, thankfully.

OK. Thank you for responding and clarifying.

David, have you considered allowing members to submit a unique domain name to you and then you allow TT to resolve that domain for that unit?

@dave
+1 here… we have our own domain name for the troop, and don’t want TroopTrack to manage our domain MX records. We already forward to “ourtroop.trooptrack.email”… but the “reply-to” and “from” addresses would need to be modified by TroopTrack to look like they came from our “troop.org” address rather than the “trooptrack.email” address.

Will this be possible?