As I hope you know, our most recent big feature launch was RSVP’ing directly from the event invitation emails.

The current big feature we’re working on is Achievement Approval: A scout or parent will be able to enter completion dates for requirements that won’t be considered final until someone with the right privileges confirms the completion dates. Here’s what the leader might see when they go to approve the achievements/requirements: 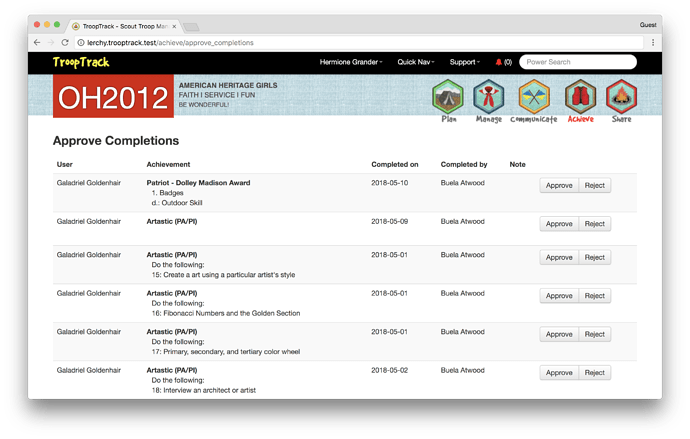 (There will be a setting to turn this off and just keep things the way they are now.)

We’re organizing them better and retiring all awards that aren’t from national.

We’re already looking for our next big feature to work on, and we’d like some input from you. We’ve gone through some of the most-viewed #new-ideas posts, and we’d love to hear which ones are most urgent to you. Go ahead and vote for one or two of these ideas! Comments are welcome!

It would be nice to have a shopping card so we can pay for all the members of a family at once and not having to do separate payment transactions, one member at the time….

How about finishing the API? There’s so much potential there if it had the full power of reading and writing.

Hi Eric,
Our long term plan with the API is to make everything you can do in TT available via the API. We also have plans to then open source the front end to give you the freedom to do whatever you want in the user interface. That’s the current strategy, and we don’t have a timeline for it, but I thought you’d like to know where we are headed.

We have a number of families who were invited to join but didn’t. The show up in manage households and patrols as “unassigned”. I don’t want to deactivate their accounts because I hope they will join at some point, but they are complaining about too many emails. I realized that every time we create an event and choose to invite “everyone” then all these parents who never finished registration are getting these emails from troop track. Can we have a setting for that in our unit? “DIsable emails to parents who have not finished registration” (yes/no)

Two others that really interest me, lock the column headers when recording attendance, and make it easier to update leadership positions.

Totally excited about Achievement Approval! Any rough estimate about when that will launch?

We avoid giving delivery estimates, but Spencer is working this as his top priority right now.

I would be happy if you all would just clean up a couple of items and give the RSVP the same functionality as Sign Up Genius or Google Forms, as follows.

Another one that is not listed, but I think I made the suggestion somewhere.
Create Mailing lists based on position. For example:
ScoutLeaders@gmail.com
x SPL
x ASPL
x Patrol Leaders
Asst. Patrol Leaders (not selected)
x Troop Guide Etc.

The point being - set it up once. When leadership positions change then the mailing lists change.

The shopping cart would be a huge improvement for RSVPing multiple members with payments. Would also like to be able to make one time account payments or sales of items like shirts, “spirit wear”, etc

I selected role privileges, as that’s the one that would help me most BUT what would help convince the other leaders is either finishing up the email changes or further expanding the RSVP from email functionality. The first one, I never quite figured out so didn’t really push it on other leadership. As for the second it almost caught on, but the feedback was: “how do I know who signed up first” (it’s always good to know who’s on the waitlist when you’ve an inevitable cancelation) and “this sign-up sheet was almost as good as SUG, but how do I do the thing you did with RSVP-from-email”? Sigh.